What are probiotics and prebiotics?

According to the World Health Organization and Food and Agriculture Organization of the United Nations, probiotics is defined as “living microorganism which, when administered in adequate amounts, confer health benefits to the host.” These microorganisms are usually bacteria and are sometimes referred to as “healthy”, “friendly”, “good” or “beneficial” bacteria.

As many as 100 trillion bacteria belonging to more than 400 species in the intestinal flora, aid digestion through the production of enzymes, stimulate the immune system, produce antimicrobial substances, and compete against invading micro-organisms3. Probiotics help fortify the population of beneficial bacteria in the intestine, which promotes a proportionately healthy balance in the microflora, allowing it to assume its functions in the digestive and immune systems.

In a nutshell, intestinal flora represents the first line of defense against microbes and other infectious germs. The bacteria of the flora temporarily adhere to the intestinal wall and reinforce this physical barrier to pathogens and blocking them from adhering while also competing directly with them for the nutrients found there. Lactic acid bacteria produce organic acids that contribute to a low intestinal pH level, bacteriocins, and hydrogen peroxide, all of which actively discourage the propagation, growth, and survival of pathogens4.

Did you know that within the colon alone, there are over 500 bacterial species? Bacteria are not all bad, however. The good bacteria in the gut break down carbohydrates to create 10 % of our daily energy. They also help the body fight infection and disease by combating the effects of the bad bacteria. Bacteria also help make vitamin K and keep the immune system functioning properly.

The foundational idea is that in order to stay healthy, people need to maintain a delicate equilibrium of microflora (i.e. a mix of different bacteria) in the gastrointestinal tract.

Prebiotics are defined by several criteria: they are indigestible by the stomach and are not absorbed, they are fermented by the GI microflora (that mix of bacteria we just mentioned) and stimulate the growth and proliferation of beneficial bacteria in the gut. Prebiotics essentially help facilitate the effect of probiotics.

Where are probiotics and prebiotics found?

Probiotics (including species of Lactobacillus, Bifidobacteria and Yeast) can be found in food as well as dietary supplements including yogurt, milk, natural soy products such as miso, tempeh, soy milk. The largest group and most well-known of the probiotics is lactic acid bacteria (Lactobacillus acidophilus, found in yogurt). 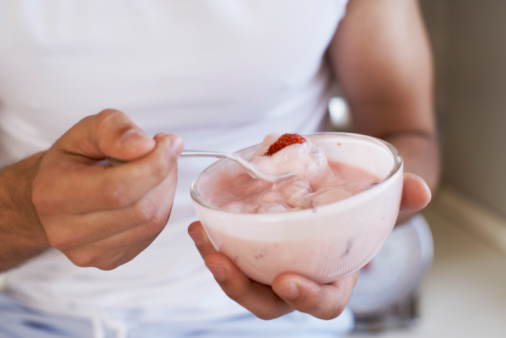 An Imbalance of Good vs. Bad Bacteria

When the bad bacteria and yeast become overgrown in your intestinal tract, you have a condition called dysbiosis. Dysbiosis has been linked with disorders like yeast infections, irritable bowel syndrome and rheumatoid arthritis. A common cause of dysbiosis is antibiotic therapy. The antibiotics that you take for killing ANY infection will also kill the healthy bacteria in your digestive tract. I always recommend that people supplement their diet with pro and prebiotics when taking antibiotics for any length of time.

What are the proven health benefits of probiotics and prebiotics?

Studies have found multiple benefits associated with probiotics; typically probiotics are beneficial in a situation when the natural microflora in the gut may have been disturbed, as is commonly the case with antibiotic use.

The following is a list of possible health benefits and uses of probiotics:

What are the possible side effects or risks associated with the use of probiotics and prebiotics?

While probiotics are generally found to be safe, few studies have been conducted on the elderly, young or immune compromised populations. In populations where probiotic use has been studied, side effects are typically mild (for example, increased gas or bloating).

As with probiotics, prebiotics can cause gas, bloating and increased frequency of bowel movements when consumed in large quantities (i.e. you may fart and poop more).

Daily consumption of foods containing these functional components is beneficial; however the effects of probiotics are dependent on the strain and species ingested and can only be assessed through clinical trials. While probiotics and prebiotics have been shown to have a variety of advantageous effects, additional supplementation is not vital since these bacteria already naturally exist in your gut and reproduce independently.