Medical Marijuana: A Look Into How It Helps

Medical Marijuana: A Look Into How It Helps

With all the controversy over marijuana (for as long as people can remember), it is definitely a subject that holds a great debate. Even its many nicknames can bring about a different attitude or feeling. Medical cannabis, another popular alternative name, has reached great popularity as a form of natural and alternative healing across many health (including traditional, clinical, modern eastern and western) mediums and culture. Marijuana is used, for different purposes (recreational or medicinal) and by people of all ages. This article is a fundamental outline of the most popular medicinal uses for the green plant. Politics (so far 20 states in the United States have passed legislation for the use of legal medicinal marijuana), morale, culture, religion, personal creed, society and individual opinions aside, the following are helpful reasons why people use the herb to help their body and minds.

✪ Medical marijuana may be an effective cancer treatment and an alternative to many drugs currently used to treat cancers including breast cancer, cervical cancer, colorectal cancer, brain cancer, leukemia, lung cancer, prostate cancer, and many other cancers by preventing the growth of blood vessels that help supply cancer. 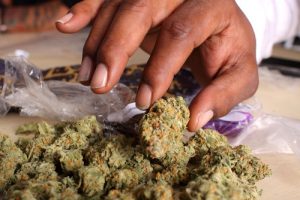 ✪ Medical marijuana has been shown to greatly stimulate the appetite of people who are in cancer treatments and who have cancer and have great weight loss due to a decrease in the interest of food and appetite.

✪ Medical marijuana can also help to alleviate symptoms associated with traditional cancer treatment, including nausea and vomiting as well as pain associated with cancer.

✪ Medical marijuana has also been shown to alleviate psychological disorders, unrest, anxiety and ease muscle tension in order to enhance relaxation. In fact, people with MS have been found to decrease the frequency and numbers of tremors since using medical marijuana. Their muscle stiffness greatly is reduced as well.

Medicinal Cannabis is Most Commonly Used for:

o Tinctures and tonics, which can be added to food, or put directly on your skin.
o Topical’s and lotions