Liposuction: Where Does the Fat Go? 11 Risks, Side Effects & Dangers

Liposuction: Where Does the Fat Go? 11 Risks, Side Effects & Dangers

Fat in the body.

It is most often determined by heredity, gender, health, diet and activity levels. These factors determine how much mass and where this mass may be located in people.

“Hypertrophic obesity results in an increase in the size of the fat cells, without a change in their number. It is usually a post-adolescent phenomenon, and holds true until total body fat exceeds 40 kg (morbid obesity – greater than 200% ideal body weight), at which point new fat cells are produced to accommodate the enlarging lipid reserves.”

Surgeons report that getting liposuction does not cause more fat to grow elsewhere, though people may feel as though it does.

A note to remember for people considering liposuction or who have received treatments is that if the calories eaten are more than those burned off, the body will have to store the calories in the form of fat.

Because liposuction removes the fat cells from the hips, thighs – wherever, and the fat needs to be stored SOMEWHERE, it gets stored in the treatment area and in other areas.

So if it appears that you just pasted on that greasy, fatty meal to your butt, thighs and other areas that have never previously gotten fat before, move your body and exercise.

For every 3,500 calories, people consume and do not burn off, a pound of fat is gained.  Let’s use my body in a hypothetical situation as an example:

In the desire to shed the extra body fat and obtain a shapely figure, the dangers of liposuction are sometimes overlooked.

The lure of gaining a trimmer tummy and slimmer thighs sans dieting and exercise seems an attractive proposition.

Possible side effects of this procedure are bruising, swelling, temporary numbness and discomfort in the surgically treated area.

There is a possibility of serious complications such as blood clots, infection or allergic reactions if the procedure is not performed by an experienced and board-certified plastic surgeon.

Risks and Dangers of Liposuction 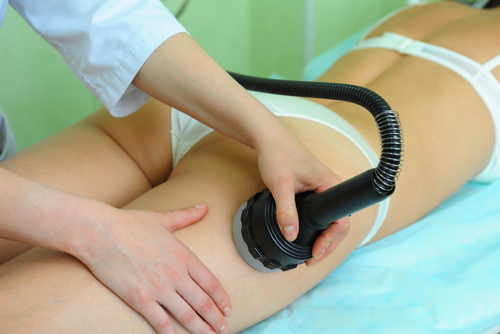 Liposuction is a medical procedure which removes excess fat from specific areas of the body to improve its shape and contours.

A blunt tube similar to a straw is inserted through tiny incisions in the skin. A suction pump is connected to the tube, which is moved in a side-to-side motion, vacuuming out the excess fat.

Though the popularity of plastic and cosmetic surgery, especially in the media and with celebrities, is growing at an expedient rate, there are many side effects and dangers associated to the get skinny-quick method of these medical procedures.

There is also a chance that vital organs can be perforated or injured. Other dangers of liposuction can occur during the recovery process, in which the patient can incur infection or have unfavorable drug reactions.

An ideal candidate is close to their target body weight, within 10% to15%, exercises regularly, maintains a healthy diet, and has fairly elastic skin with either one or a few stubborn fat deposits.

By removing fat cells, people will have less bulk, be slimmer, and have fewer tendencies for fat to accumulate in that area in the future. Also, people who have a chronic medical condition such as heart or kidney disease should avoid liposuction.

Board certified surgeons agree that dangers of liposuction are reduced or eliminated by adhering to specific methods, but even the drugs used for general anesthesia, for example, may pose a great risk.

The dangers of liposuction associated with these medicines, including respiratory arrest and allergic reactions, are eliminated by not using them.

If the tumescent technique is followed, then these particular dangers associated with liposuction can be reduced for eradicated.

Any dangers associated with sedation (ie drugs used for general anaesthesia carry more risks than those used for local anaesthesia), such as allergic reactions or respiratory arrest, are eliminated when they are not used.

Other potential side effects of liposuction are temporary numbness, swelling, bruising, and general discomfort in the treated area.

Serious complications such as allergic reactions, infections or blood clots are possible if the procedure is not correctly performed.

Liposuction dangers can increase in proportion to the size of the area to be treated and the amount of fat to be removed.

If the area to be treated is relatively large or includes multiple areas, the potential dangers can be substantial as there is always the possibility that vital organs can be injured or punctured.

The recovery process too is not free of its potential dangers, either. Patients can react adversely to certain drugs, or possibly get an infection. Post-operative liposuction scars are most definitely permanent; but could fade in time.

Below is a summary of the top 11 risks and dangers associated with liposuction:

Some common and unfortunate results of liposuction procedure surgery are asymmetry and irregular contours of the treated area, and this may warrant further operations.

This can be an unwanted result after a liposuction procedure, by patients whose skin has poor elasticity.

Stretch marks can sometimes be a sign of poor skin elasticity and this is perhaps an indication to a candidate that maybe their skin is not suitable for this procedure.

And whilst this is generally not a danger nor a complication for younger patients, those prone to stretch marks may indeed end up with an excess of loose skin and thus they may require further surgery to remove it.

It is possible to remove excess skin at the same time as the liposuction procedure is performed.

Oedema or swelling may continue for some weeks or even months after surgery.

Swelling can result in a tingling feeling or numbness being caused by pressure on nerves within the body.  Because of this, it is important to wear a compression body garment to help reduce any swelling and to speed the recovery process.

Sometimes pockets of fluid, also known as seroma, can gather in spaces within the treated areas and these will need draining.  The likelihood of swelling and seromas forming are reduced when a compression garment is worn.

If the knee or inner part of the upper thigh is treated, bumpy and raised veins (known as thrombophlebitis) can appear after surgery, but they should settle down within a few weeks. The ankles can swell too.

Bruising can sometimes be considerable, is generally painful and can often take more than 4 weeks to disappear.

Ultrasound-assisted liposuction uses a probe which heats to an intensity that can cause burns, however, the risk of burns is reduced if the probe is not used too close to the surface of the skin and if it is not kept in one place for too long a period of time.

Infections can occur after liposuction procedures are performed.  Antibiotics are often prescribed post-operatively as a preventative measure against infection occurring.

Indications of an infection would be increasing tenderness, inflammation of the area treated, red blotches or streaks on the surface of the skin, a high temperature and vomiting.

It is possible that fat can break free during the procedure, getting into the blood vessels and make their way to the lungs.

This can cause a blockage, known as a pulmonary embolism and can cause difficulty with breathing or even fatality.  This risk is at its highest within the first three days after liposuction.

There is the possibility that internal organs such as the intestines can be damaged as a result of the cannula puncturing them because the surgeon is actually operating beneath the skin through a tiny incision, and he is unable to see where the cannula is probing as he performs the procedure.

If any organs are damaged during the procedure, it is possible that they would need to be repaired with further surgery.

If the patient has a hernia (intestines protruding or pushing through the abdominal wall) the possibility of damage is greatly magnified.

It is possible that an accumulation of lidocaine can result if too much is injected into the area during liposuction.

Indications of this are drowsiness, slurred speech, muscle twitching, convulsions, shivering, light-headedness, numbness of the tongue and lips and eventually even cardiac arrest.

Fortunately, nowadays, instances of lidocaine toxicity are quite uncommon due to more and more patients opting for tumescent liposuction where small concentrations of lidocaine are used, thus reducing these risks.

Large quantities of fluids are injected into the area to be treated during tumescent liposuction.

Some of this fluid is then removed in the fat tissue at the same time that the fat tissue is suctioned out, potentially resulting in an imbalance of fluids.

If this is not noticed and is left untreated, it can lead to serious problems, for example, heart or kidney failure or dysfunction, or fluid in the lungs.

A build-up of fluid in the lungs, known as pulmonary oedema, can occur as a result of the fluid injected into the body during the liposuction procedure.

11. Possibility of a Liposuction Death

The risk of liposuction death cannot be ruled out.  The chances of death during this procedure can increase when other surgical procedures are carried out at the same time.