Green Tea and Its Amazing Abilities

Green Tea and Its Amazing Abilities

The Chinese have known the healing power of green tea for generations. Many believe that the unprocessed tea leaves can help to prevent or even cure many chronic diseases including heart disease, cancer and dementia.

Volumes of scientific evidence now provide compelling proof that the active polyphenol found in green tea (EGCG) has the power to increase the number of regulatory immune support T-cells. T-cells play a crucial role in the suppression of autoimmune diseases including the terminal condition ALS (Lou Gehrig’s disease). Research published in the journal Immunology Letters demonstrates that regular consumption of green tea can help your innate immune system to operate at peak efficiency to fight invading pathogens.

Autoimmune diseases occur as the result of an imbalance in the immune system that results in the body mounting an attack against itself. Immune T-cells are critical in providing a defensive shield that can protect against cancer proliferation and a host of diseases where the body recognizes healthy cells and organs as foreign. T-cells also help to control systemic inflammation and can dampen the inappropriate response to normal cells seen in autoimmune conditions.

Scientists conducting this study found that EGCG found in green tea was responsible for a significantly higher number and frequency of regulatory T-cells found in the spleen and lymph nodes, helping to control the immune response. They found that EGCG did not directly affect the genetic DNA, but did influence gene expression that determines how the genetic material is switched on or off as a response to food consumption. Epigenetic regulation is a rapidly emerging science that explains the extensive health benefits seen with a natural diet.

Researchers have found a dual role for green tea polyphenols include boosting T-cell production and fighting cellular inflammation. Both mechanisms are critical in fighting conditions exacerbated by chronic inflammation such as cancer and heart disease as well as autoimmune disorders.

Studies that involve regular consumption of naturally occurring foods and extracts are rapidly mounting to explain the importance of the foods we eat on our genetic health. Genes are expressed immediately following each meal and directly influence the progression of disease and the prevention of most chronic conditions.

White tea, oolong, and black tea are also made from the Camellia sinensis leaves, but for green tea, the leaves are steamed immediately after picking, thus reducing oxidation. 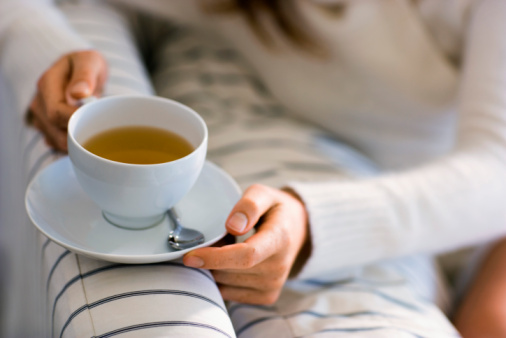 Green tea has about ¼ the caffeine of coffee.

Green tea is full of polyphenols, antioxidants that are very helpful in ridding the body of free radicals – unstable molecules that damage our cells. It has the power to lessen free radical damage.

Green tea has been claimed to help:

Don’t use boiling water to brew green tea! The water should be just below the boiling point.

Loose leaf green tea likes to expand when steeped, so allowing for enough room is important. Investing in a tea pot specifically made for green tea is the best way to accomplish this.

Usual steeping times for green tea is 2-3 minutes. However, high quality teas, like the Japanese Gyokuro, require a shorter amount of time and cooler temperatures. Steep too long or too hot and your tea will taste bitter.

And the best green tea cannot be found in little pouches sold at the grocery store. You must purchase them from a reputable source and supplier that gets is from Asia. There is a Chinese saying, that the tea scraps inside the bags are the sweepings of the floor, to symbolize the quality and taste of typical grocery store bought and Americanized commercial tea bags. Many tea manufactures overseas fumigate their tea before it is packaged to rid the leaves of infestation, thus contaminating the tea with toxins and harmful chemicals. This process also degrades the tea leaves in antioxidant levels. You must do your research before buying high quality tea to reap the true benefits of this superfood.

Many reports and research show that there are some incredible properties contained in good quality green tea, which can help to cure or prevent some serious health conditions, if you know where to buy it.

1. Green tea can help to stop the growth and spread of cells that cause cancer. Research has also suggested that because Japan has a comparatively low rate of cancer, it could be down to drinking tea.

2. Tea can be a weight loss aid as there are no calories in tea without milk. When combined with a healthy diet and exercise, drinking tea can be a good way to lose weight.

3. Tea can help to prevent diabetes, as it stops as much sugar being broken down, and being absorbed into the blood stream. For those with diabetes, it can also reduce the risk of cataracts.

4. Tea is very effective at thinning the blood, in fact, as effective as aspirin. This means that it can be a good alternative to taking medication on a daily basis in order to thin the blood.

6. Tea is believed to have anti-aging properties. The Japanese have one of the longest life expectancies in the world, and this is partly attributed to drinking green tea. In addition, there are many new anti-aging beauty products that include tea extracts.

7. The growth of bad bacteria in the body can be slowed down by drinking this tea. This helps to speed up the growth of good bacteria, and can even help prevent viral strains of clostridia and E. coli.

8. Drinking tea helps to lower cholesterol, and can help to widen the arteries reducing the risk of heart disease.

9. Drinking around 4 cups of tea a day can help slow down tooth decay as tea contains fluoride which is important for the health of teeth.

10. In order to get the health benefits of green tea, it needs to be made properly. Steeping it for too long, or not long enough, or using water at the wrong temperature can dramatically affect the taste of the tea.

Newer Gas and Bloating: Be Gone!
Back to list
Older Healing Homemade Broths